Our editors pick the products & services we write about. When you buy through our links, we may get a commission. Learn more. 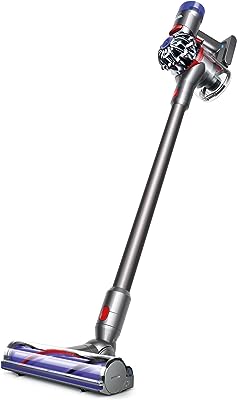 Dyson is a huge name in the vacuum cleaner industry, and they have been since their founding in 1991 by James Dyson. The engineer helped the brand revolutionize vacuums with its cyclonic filtering system and bagless dirt collection bins visit. Although Dyson originally manufactured upright vacuums, they have now branched into other types of vacuums and even other home products.

Today you will find canister vacuums, cordless stick vacuums, and products like blow dryers and space heaters for sale from the brand. All of these products https://xn--ygba1c.cc/ are top of the line and have a price tag to go along with that reputation. However, if you have the money, then a Dyson vacuum, especially the V7 Animal is totally worth the expense. Read the rest of this article to find out why.

What is the Dyson V7 Animal?

Dyson began its production of cordless stick vacuums in 2015 with the DC72 and the V6. The manufacturer quickly saw the value in continuing to create these helpful products, and so moved on in 2016 to the V8. In 2017 Dyson then released the V7.

Yes, the number switch can be confusing—eight comes before seven in the V models. However, keeping the two cordless stick vacuums straight is actually not that hard. Dyson’s V8 was a slightly more powerful and definitely more expensive model. The V7 is based on the design of the V8, but the battery does not last as long, and the motor is not as powerful. The battery only runs for about thirty minutes where the battery on the V8 runs for forty minutes.

Additionally, the V7 is lighter than both the V6 and V8. But, it has a less powerful motor, which creates that weight difference. The V7 Animal only produces 21 air watts of power, where the V8 produces 22 air watts and the V6 produces 28 air watts. But, the longer runtime on the V7 Animal as opposed to the V6 and the larger dirt collection bin and great attachment options make the V7Animal a great choice for most people.

The V7 Animal is just one of many great cordless stick vacuums from Dyson. It comes with a lot of pros, but there are a few cons as well. We will discuss both in this section.

What types of flooring does the Dyson V7 Animal clean?

Like many of the Dyson products, the V7 Animal will clean almost any type of flooring or surface, you can check here reviews of Dlouhy Doors Inc. The included motorhead has stiff nylon bristles that excel in removing caked-on dirt from carpets. However, the motorhead will also clean any hard floor without causing damage. And, the smaller amount of power means that you may be able to use the V7 Animal on some high pile carpets. Just proceed carefully in that regard.

All of Dyson’s cordless stick vacuums can be converted into a handheld vacuum as well, and the V7 Animal is no different in this regard. In fact, because of the large number of attachments included in the Animal package, you can clean even more surfaces than normal. The soft dusting brush is especially good for cleaning food-related messes or being used on delicate furniture or upholstery.

Who would benefit from the Dyson V7 Animal?

If you have a pet (or pets), or if you need a lot of different types of attachments, then the Dyson V7 Animal is likely the vacuum for you. Because of the lower price tag on this vacuum in comparison to other Dyson products, you can have a medium budget and still afford the V7 Animal. Plus, Dyson tends to run good sales on their cordless stick vacuums, so keep your eyes out for those.

The Dyson V7 Animal does more than just clean up pet messes. It is a versatile stick and handheld vacuum that comes with a large number of attachments and has the ability to clean almost any surface in your home. Don’t expect this product to have the most power out there or to run for very long. However, its lightweight nature and lower price still make the V7 Animal a great choice for many people. Whether you are a Dyson fan or are new to the brand’s products, you need to try the V7 Animal for yourself today.

Jennifer is a work-from-home freelance writer, editor, and dog mom. So, like Angela, she understands how important it is to keep her floors clean. Jennifer currently lives in a home with carpet and tile floors. Therefore, she is an expert in cleaning those specific types of floors.

When you don’t find Jennifer at her computer writing and editing, you will see her with a vacuum in hand. She greatly appreciates the chance to provide content for this website with Angela and looks enjoys spreading her floor cleaning knowledge with the world.